Ethereum’s decentralized finance arena has seen the beginnings of breakout success in 2020, but with the rise of DeFi comes the prospect that other up-and-coming smart contract platforms and the chains and dApps they power will be able to peel off activity for themselves in the sector.

To be sure, Ethereum’s lead here is resolute for now. But that doesn’t mean there aren’t competitors already planting the seedlings for their own DeFi gardens. One of these competitors is Polkadot.

Polkadot is a multichain network, which essentially means it’s a blockchain of blockchains, where interoperability between these chains, called parachains, makes them open and interconnected rather than siloed. To this end, the Polkadot team developed Substrate, a framework for easily creating new cryptocurrencies and blockchains.

Of course, Polkadot is a young project as its initial version only just launched back in May 2020. But the network’s Substrate tech is already paving the way to DeFi services in the Polkadot ecosystem. A prime example of this dynamic is the rise of the Substrate-based MANTRA DAO.

A DeFi Platform for Polkadot

Simply put, MANTRA DAO is a community-governed decentralized application, or dApp, built on Rio Chain, a blockchain underpinned by Polkadot’s Substrate infrastructure. At its core the MANTRA platform has three pillars, which are lending, staking, and governance.

As such, MANTRA’s key offerings center around cryptonative earning opportunities like decentralized lending and saving services, as well as non-custodial crypto staking. Moreover, the project’s governance system empowers and incentivizes stakeholders to manage MANTRA into a well-tuned and effective platform.

A Hub for Staking Polkadot Assets

Since Polkadot is structured around the interoperability of parachains, it stands to reason that over time projects will proliferate atop it. Accordingly, MANTRA DAO is positioning itself to become a non-custodial staking hub for Polkadot-based assets and beyond.

Indeed, out of the gate MANTRA will support staking for Polkadot’s DOT token and KSM, the native token of Kusama, Polkadot’s community research network. OM, the governance token of MANTRA DAO, will also be supported by the group’s staking platform.

Yet MANTRA has also set its eyes beyond Polkadot. For example, the DAO also intends to provide non-custodial staking services for a range of general Delegated Proof-of-Stake (DPoS) assets, including ADA, BAND, ELA, EOS, TRX, and XTZ. Additionally, the DAO is planning to support staking around straightforward Proof-of-Stake (PoS) assets like ETH 2.0 and DASH, too.

Notably, the platform initially won’t charge staking service fees for Polkadot-based assets, though it will require them for DPoS assets. This dynamic could lead to MANTRA DAO becoming a premier early staking hub in the Polkadot ecosystem.

Yet the platform has another staking-centric service in the works, which is dubbed MANTRA POOL. This pool will function as a crypto savings game: the service will randomly select winners to receive weekly cuts of the staking rewards generated by MANTRA DAO Foundation, a separate legal entity focused on fostering the MANTRA ecosystem.

One-fourth of the staking rewards accrued by the Foundation will be earmarked for the savings game, and these rewards will be distributed as they come, i.e. a basket of assets like DOT, OM, KSM, and so forth. To join the game, users must either burn one OM per entry ticket, or they can qualify for automatic entries if they score high enough in MANTRA DAO’s reputaiton protocol, KARMA.

Lending has been the hottest nook of Ethereum’s DeFi surge this year, and MANTRA DAO is looking to tap into that heat.

That’s because an early focus for the platform will be building “cross-chain bridges to existing open-source DeFi lending protocols, such as Compound, to offer our users access to lending interest for Ethereum-based assets.”

It’s a smart, if you can’t beat ’em join ’em approach that will give Polkadot users the ability to access the best that Ethereum’s lending sector has to offer. But this is just the start of MANTRA DAO’s lending plans.

Eventually, the platform’s roadmap has it embracing 3rd-party lending service providers “across multiple blockchains” but with the perk of all this being mashed into a simple user interface.

Even further down the road, the project is planning to build its own lending algorithm and stablecoin, a la MakerDAO has done in the Ethereum ecosystem. The difference is that MakerDAO loans can only be collateralized with Ethereum-based tokens, while MANTRA DAO will more nimbly allow cross-chain collateralized assets. This means users will be able to take out loans denominated in MANTRA DAO’s USDOM stablecoin using assets from across the cryptoeconomy. 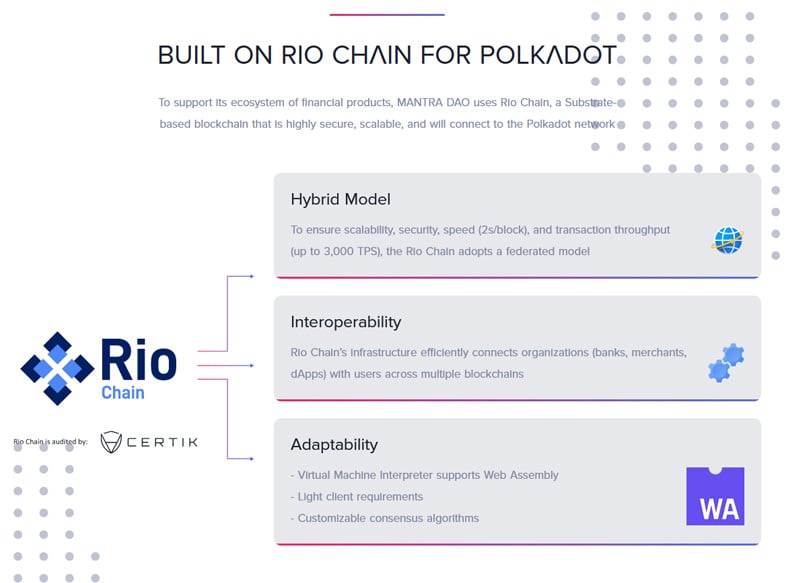 Governance has been among the hottest topics in the cryptoeconomy this year. MANTRA DAO is making it the heart of its project using its OM token, which users will rely on to decide the parameters of the DAO’s DeFi offerings. The project’s builders explained in a brief shared with Blockonomi:

“In order to submit a proposal and vote within the MANTRA DAO ecosystem, a member must first hold and stake OM. Each staked OM represents 1 vote within the MANTRA DAO system. In order to propose a topic for voting, users will need to deposit $100 worth of OM as collateral. If the proposal should fail, they will lose the OM, but if the proposal passes evaluation from the council, then the vote will proceed. If the proposal receives a simple majority (51%) of the votes from the valid voters (staking OM), then the depositor will receive their OM back as well as an additional amount of KARMA for helping the ecosystem.”

This voting process takes place over the course of a month, with one week each dedicated to 1) proposals, 2) evaluation of proposals, 3) voting on proposals, and 4) proposal implementations.

Moreover, every 24 months MANTRA voters will on the members of a MANTRA DAO Council, a sort of executive branch of the decentralized organization. The body will start out at 5 members and be capped at 9, with odd-numbered membership always employed so as to prevent ties during council votes. Council members will have a 5-term term limit, as well.

This structuring will additionally allow for the creation of sub-councils within MANTRA DAO, though these lesser councils will be subject to the veto power of the main council.

Building Up the Community

MANTRA DAO’s ecosystem won’t build itself up. To that end, grants can help foster and attract talented builders around the platform’s infrastructure.

That’s why MANTRA DAO Foundation is, in fact, establishing a grants program that will boost efforts to create new applications and use cases around MANTRA’s tech and OM tokens. Accordingly, these grants will be denominated in OM or the USDOM stablecoin, and will number between $5,000 and $100,000 in value.

If there ever was a time for non-Ethereum platforms to throw down the gauntlet and try to gain market share in the DeFi arena, now’s it. The sector’s catching fire right currently and the best time to move on that reality was yesterday. MANTRA DAO, as a Substrate-based blockchain on Polkadot, is certainly one of these gauntlet throwers.

For now, it’s impossible to say whether projects like this will be able to seriously catch up on Ethereum’s DeFi moats, but MANTRA DAO is giving it a go, and it has a real opportunity to become an early DeFi hub in the Polkadot ecosystem. If DeFi eventually goes multichain, this DAO will be well positioned accordingly.